How likely are we to go back to sports?

COVID-19 has taken its toll on all of us, including our mental, physical, and nutritional health, and the lack of involvement in sport for many of us hasn’t been good for us either.

When we exercise, our bodies release something called endorphins, which reduce your perception of pain and also create a positive feeling in the body, similar to that of morphine. When we watch sport, we get excited if our team will win, sad if our team loose, we get the community feel of lots of people enjoying the same sport – something which everyone in that stadium can share and enjoy mutually.

Clearly it will be a while before we can properly go back into sports fully, both watching and participating – we have already seen some sports begin to return, for example netball is making a comeback in the next few months; but how many of us will actually return to stadiums? Do we think it’s safe to go back? If not, how long will we wait until its “deemed safe”? 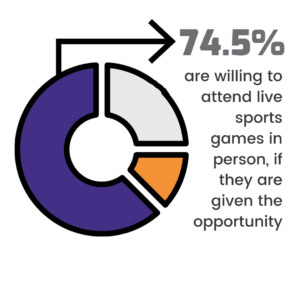 74.5% are willing to return to live games if they are given the opportunity.

A survey taken by Commodore Country in June 2020 surveyed 227 people over a period of two days. The majority of the responses were “not only willing to attend by excited for the opportunity” to return.

Out of the total 227, 39 of those taking part in the survey said that they will wait and see what happens before making a firm decision to return or not.

Now that we are several months ahead of this survey, what are your views? And what would your decision be? Are you willing to return to live games, given the opportunity, or would you rather watch from home?