Should Cheerleading be a classified sport?

We know all about cheerleading in the USA, but how about in the UK? The Covid-19 pandemic had a huge impact on the sporting industry, and it meant that sports games were not the same. But now that we are slowly returning to some order of normality, has there been a rise in demand for live entertainment during sports games?

During the pandemic, many of us watching our favourite sports were glued to our screens at home, awaiting the next goal and point. But we have become so used to viewing sports over our televisions and devices, have we forgotten just how good it feels to get the live half time entertainment?

A little bit of history…

Live entertainment is something that we all love, whether that’s a small concert, your favourite artist’s global tour or live sports games, there is something in the atmosphere that makes us all buzz with excitement. The very first Super Bowl was held on January 15th, 1967, where there was also a half time show featuring the Three Stooges with The University of Arizona and Grambling State marching band. Super Bowl games primarily consisted of marching bands and drill teams (military or dance drill teams) up until the 1990’s, which is something we may find strange, considering we now consider half time entertainment to be filled with our favourite artists and acts.

Celebrity acts were first introduced in 1972, featuring Ella Fitzgerald and Carol Channing, making them the first celebrity singers to ever appear in the half time show. Half time entertainment was going dramatically downhill in the 80s, so it was decided to step it up in 1991. The first ever pop group to perform for the Super Bowl was New Kids on the Block. Entertainment from then on became more dramatized, and bigger and better. Over the years we have seen a big rise in the excitement for live half time entertainment, seeing the likes of Michael Jackson, Bruno Mars, Prince and Madonna take to the field.

Cheerleading as a half time sport

Over the past several decades, we’ve seen all of this entertainment during half time in the United States, but what about the UK? One thing that we have picked up on is that there has been a surge in demand for cheerleading here in the UK. More and more people are taking to the sparkly outfits and pompoms, cheering on their teams with flips and tricks.

So why is it growing? And can it really be considered a sport? Cheerleading is led through all-star, university, and school teams, with a generous 37% of schools offering cheer to students in 2010, with its cheerleaders committed to bringing enthusiasm and energy to fans and the local community. Many cheer teams compete against each other, at regional, national, and international levels. Most cheer teams attached to football and rugby heavily involve dancing rather than the gymnastics and stunting elements of cheerleading, which is commonly seen in competitive cheer. Some squads are attached to football and rugby teams, with some schools and universities introducing cheer squads to other sports teams, such as basketball (Plymouth Raiders Cheerleaders for Basketball). Although cheerleading is not currently classified as a BUCS (British Universities and Colleges Sports) sport, the rise in demand for cheer could change this.

We spoke to the Aberdeen University Storms Cheerleaders to get the views on cheerleading as a sport. 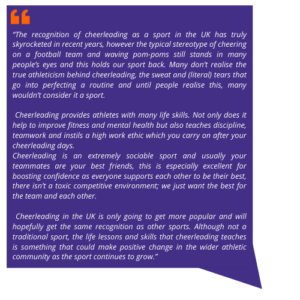 Could Cheer rise to Olympic level?

Looking at the history of cheerleading in recent years, there was a surge in cheerleading in 2010, when it started to become more of a competitive activity, and the UK have started to see another surge in cheer since England’s all girl junior squad won gold in the advanced division at the International Cheerleading Union World Championships in Orlando, Florida[1]. Because they won gold at the championships, in 2019 it was decided that cheerleading could apply to become an Olympic sport having been granted Olympic status by the IOC (International Olympic Committee) in 2016. This means that by the Paris 2024 or the Los Angeles 2028 Games we could see Cheerleading take place.

Because cheerleading has the opportunity to become a registered Olympic sport, this means that we could see more of it at UK sports games, supporting football and other sports teams at matches in the stadiums. IOC sports director Kit McConnell told the BBC that “cheerleading is a sport with growing popularity. It has a strong youth focus and we noted that”.

What does this mean for the future of our sports? Does it mean that cheerleading as a sport will fill the half time gap between games? And does it mean that we will see the younger generation having a bigger role in events such as the Olympic Games?